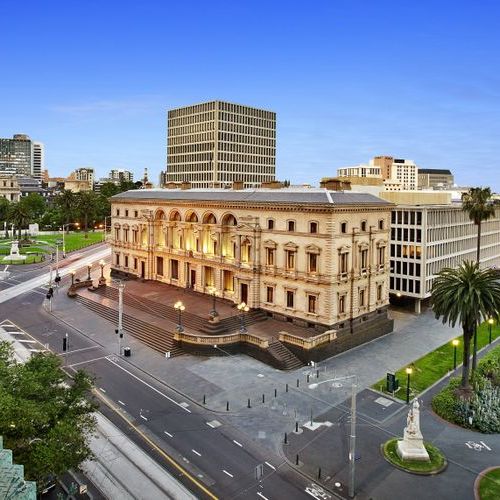 The Old Treasury Building, designed by nineteen-year-old architect John James “JJ” Clark and built between 1858 and 1862, was one of the first of his many major government buildings. It hosts the original gold vaults where gold bullion was stored during the gold rush era, as well as rare and historic documents from Public Record Office Victoria, highlighting key moments from Victoria’s history.

As one of the finest nineteenth century building is Australia, it occupies a unique position in the history of Melbourne. Its origins lie in the 1850s Victorian gold rush and the building represents the extraordinary change which took place. The design is in the Renaissance Revival style, derived from the 'Italian palazzo' form popular in the nineteenth century. While the design changed before construction commenced, each version incorporates element of the classic architectural orders: Doric, Ionic, or Corinthian and these traditional styles were blended to create a wonderfully harmonious façade. The building was also one of the first Melbourne buildings to benefit from some innovative technologies then appearing. They included a version of Cooper’s system of fireproof flooring, a travelling crane and a steam stone-cutting machine. While the building itself was completed in 1862, a shortage of funds meant that the forecourt remained unfinished and the interior of the building was not completed until 1872, when Alexander Borthwick designed the decorative scheme still visible in the Deakin Room on the ground floor.

Join with The Friends for a group tour of The Old Treasury Building Museum followed by afternoon tea to learn more about the amazing history of Melbourne.