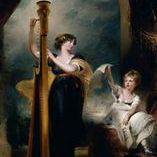 The second lecture focuses on women in the life of George, Prince of Wales (future George IV): his wife, Princess Caroline of Brunswick, who was forced to flee the country to escape her husband’s persecution and abuse, and whom he famously banned from her own coronation; and their only daughter, the beloved and popular Princess Charlotte of Wales, who openly rebelled against her father’s tyranny.