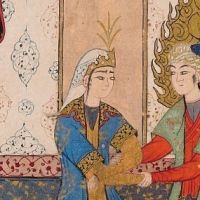 Susan Scollay, guest co-curator, Love & Devotion: from Persia and Beyond will introduce us to this exhibition at the State Library of Victoria which features nearly 70 rare 13th to 18th century Persian, Mughal Indian and Ottoman Turkish illustrated manuscripts and miniatures from the Bodleian Libraries of the University of Oxford.’

Early European manuscripts from the Bodleian Libraries will also be on display, including a Roman de la rose and works by Chaucer and Dante. This is the first major exhibition of Persian manuscripts to be held in Australia.