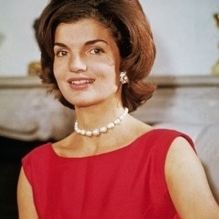 Explore how the jewels of the Camelot White House are such a poignant reminder of a tragically short, remarkable – and still yearned-for-era.

Of all the famous women of the 20th century Jacqueline Bouvier Kennedy Onassis is the most mysterious and compelling. Renowned for her role in the memorable White House of John F. Kennedy, Jackie was regarded as one of the most formidable style icons of her time.

This talk explores her treasure trove as well as her renowned interest in French, American and Greek culture. Her jewels tell a story of rare personal, historical and political significance. They also uncover a tantalising, unpredictable and elusive woman who led an extraordinary life, filled with triumph and tragedy in equal measure.

Adrian Dickens will introduce her background and see how she created the ‘untouchable’ woman she became. You will discover the reality of being the political wife of a Kennedy and understand how the assassination of President Kennedy tested Jacqueline’s sanity.

The talk will also take into account the story behind the dazzling jewels Aristotle Onassis used to woo the most famous widow in the world.

ADRIAN DICKENS trained in the United Kingdom for six years and has been a fixture on the Melbourne and Sydney fine jewellery scene for over 30 years. Adrian’s knowledge of historical and recent jewellery trends are insightful. He regularly gives talks and presentations nationally and internationally. He has managed some of Australia’s fine jewellery houses and now runs Circa AD Jewels. His most recent lecture at The Johnston Collection was THE POSSESSIONS OF THE DUKE AND DUCHESS OF WINDSOR | Art or Obsession?