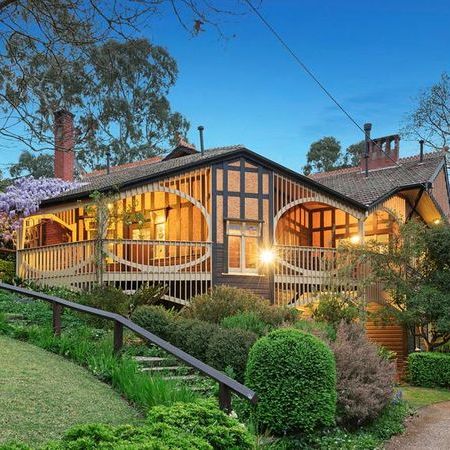 Chadwick House is one of the most important houses in Australian architectural history. Designed for his father-in-law James Chadwick by one of Australia’s leading and most innovative Arts & Crafts architects of the early twentieth century, Harold Desbrowe-Annear, this ahead-of-its-time residence is now being sold, following a three-decade labour-of-love restoration by its owners.

The Heritage Council of Victoria describes the Desbrowe-Annear 1904 design as “instrumental in introducing the open-plan form into Australian domestic architecture”, with the house and two neighbouring abodes named Annear and  Officer as reflections of his modernist innovation. A heritage plaque on Chadwick House’s lush landholding states it “incorporates medieval-inspired Arts & Crafts elements with modernist ideas such as open planning”.

Architect Peter Crone and his wife Jane bought the Heritage Victoria and National Trust of Australia-listed house about 30 years ago and they have been restoring and enhancing it ever since. They have now listed the property for sale and they are moving next door to renovate another house in the Desbrowe-Annear trio.

This painstaking renovation, stage one of which won the prestigious John George Knight Award for Heritage Architecture in 2008, involved stripping back any unsympathetic additions to the house and restoring or replacing original features.

Peter and Jane Crone are allowing The Friends to visit and tour Chadwick House, prior to the completion of the sale of their home, giving us a last chance to see and learn more about this amazing piece of Melbourne’s architectural history.