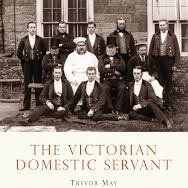 In 1851 there were over one million servants in Britain, making domestic service the second-largest source of emplyment after agriculture. The range of people who kept servants was vast, from aristocrats to the lower middle class families who employed a single 'maid of all work'. Trevor May explains teh great range of jobs available in domestic service-from the humble maids who were expected to clean their employers' rooms without being seen, to the formal, liveried footmen, who were very well paid, especially if they were tall. Many branches of domestic service in the nineteenth century are outlined, and descriptions of the working conditions of the servants give an insight into the strict social hierarchy, which was a strong 'below stairs' as it was above. <br> WEIGHT 0.93 KG