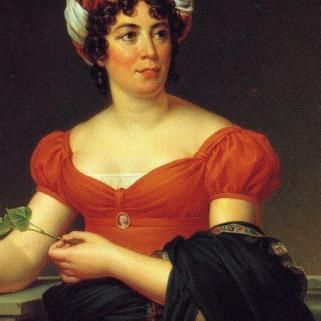 As daughter of Louis XVI's exiled Minister of Finance, Anne Louise Germaine de Staël grew up in the vortex of the French Revolution and was determined to leave her stamp on history. Her brilliant conversation and erudition made her salon a magnet for the great thinkers and writers of her day. She penned philosophical tracts which earned her the lasting hatred of Napoleon whom she pursued relentlessly with the idea that they were two superior souls who should be united in marriage. In exile she began penning novels with herself as heroine which introduced the Romantic movement into France and pioneered the first travel novels. When not plotting, talking, traveling or composing she entered into numerous liaisons with famous writers of the time, often many years older or younger, and who, like Napoleon, would do anything to escape her clutches.