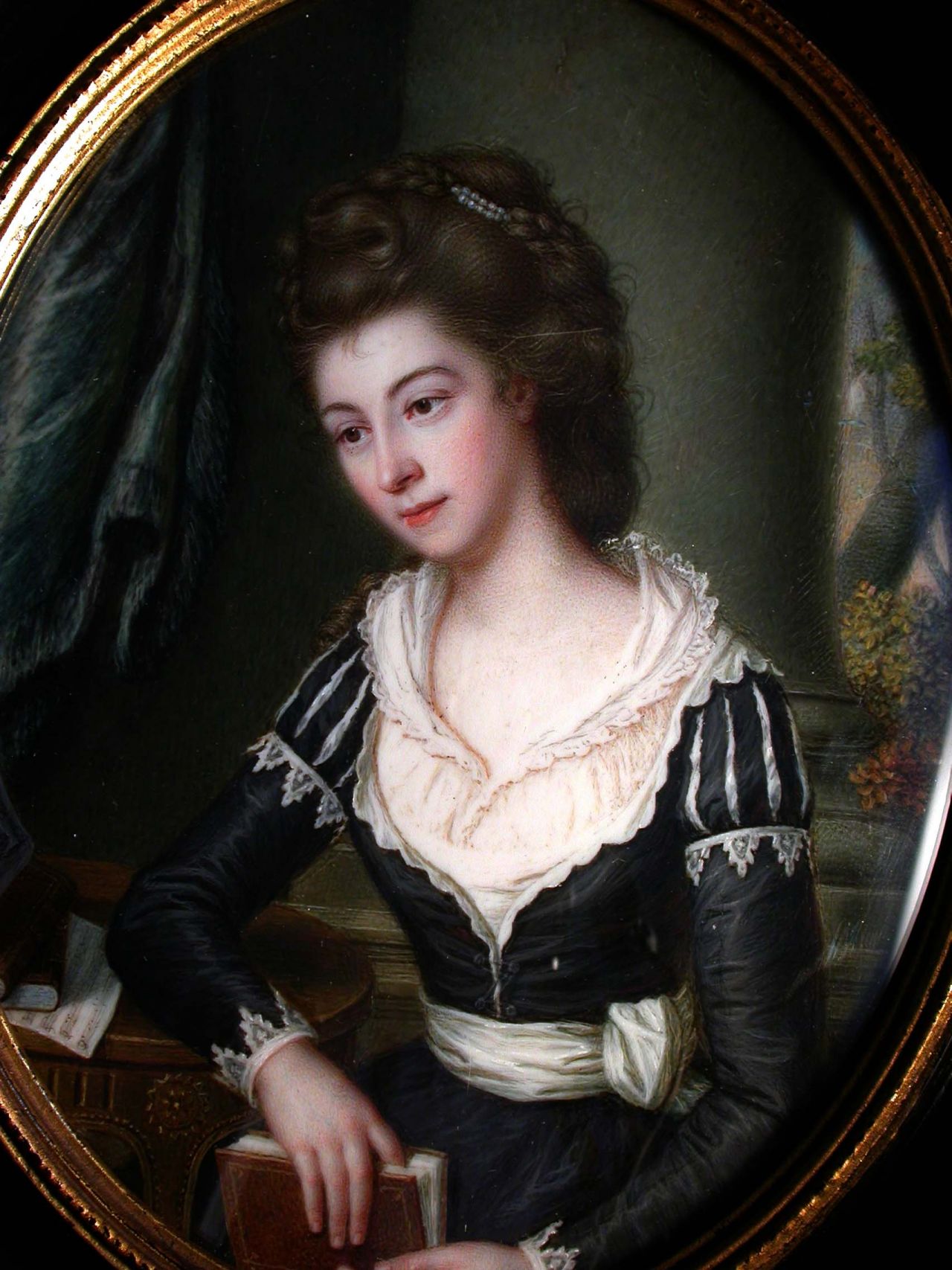 Originating from the illuminated manuscripts of medieval times, the original portrait miniature was painted in watercolour on vellum, a smooth animal skin. The word ‘miniature’, although now used to indicate small scale, is derived from the Latin word miniare, meaning to paint in red lead, which was the first colour to be used in the manuscripts. The term ‘portrait miniature’ is therefore a reference to the technique and not the size.

The minute brush strokes or stipple used, requiring half a million or more brushstrokes for a head and shoulders portrait, tend to restrict the size of the painting. Such a portrait would typically take 30 hours to complete. The first miniature was painted around 1533 and came about by accident when the artist cut out his painting of a monarch from a manuscript and framed it, so making it a stand-alone portrait. Following this, miniatures of the royal families were painted throughout Europe, representing the sort of personal images that would now be encapsulated in family photographs. Until photography was invented, the drawn or painted image was the only means of seeing a person’s likeness. These early miniatures were painted by only a handful of artists. Some of them were amateurs. In the 17th century, painting was considered a gentlemanly pursuit, particularly miniature painting as it involved only ‘clean’ watercolours, and one sat at a desk or table to work in a genteel way! Gradually, the circle of those painting in this way widened from the royal families, aristocracy and members of the Court to include wealthy merchants and their families.

During the early part of the 18th century, ivory was used instead of vellum because of the translucent look it gave the paintings, and by the middle of the 18th century, having one’s miniature painted was as usual as having one’s photograph taken today. Thousands of artists, almost all of them men, were working in every city and town, with amateur artists - often women – painting miniatures in their village. Full scale oil portraits were still painted in large numbers, but these were commissioned for a different purpose - as a show of wealth, power and pedigree. The miniature was always a personal object, to be seen only by a close circle of family and friends, or to be given to those around one as a sign of affection, gratitude or reward, such as a member of a royal family giving a close aide or adviser a miniature portrait of him or herself. ‘Miniature Painter’ was generally a well-paid trade in this ‘heyday’, with artists training and exhibiting in order to become well-known and increase commissions.

Photography continued to make inroads into the ‘personal image’ business, and by the end of the 19th century, ‘photographer’ had replaced ‘miniature painter’ as the main trade, again mostly carried out by men, with women working in the backroom as colourists and finishers. Women largely replaced men as the miniature painters of this era. Probably all would have been simpler if colour photography had been introduced quickly. As it was, colour photography did not become mainstream until more than 130 years after it was introduced and during this time the public’s desire for a portable coloured likeness was satisfied by the ‘photominiature’, a photograph developed onto ivory or a substitute, overpainted in colour and framed to look like a traditionally painted miniature. This common practice eroded confidence in the skills of miniature painters. Being cheaper to produce, it was often chosen in preference to the more expensive traditional miniature portrait. Even today it is sometimes difficult to tell the difference between a photominiature and the ‘real thing’, making collectors wary. To add to this complexity, a large number of fake miniatures were produced between 1890 - 1910 for the tourist trade, and there are collectors – and museums – who have quantities of these, not realising that their ‘treasures’ are almost worthless.

There are still miniature painters working today, using the age old methods, but nowadays they are almost all parttime or amateur, as their skills are considered a quaint anachronism.

This article was originally published in Fairhall, Issue 8, March 2013, pp 11.